Every year when we visit Malaysia, we take a day-trip to Melaka. Why? Melaka has a rich cultural history... it is World Heritage listed... and consequently many interesting places to visit. Our typical excursion would include a two-hour drive from Klang, a visit to a place of interest, then lunch at one of Melaka's famous Baba Nonya restaurants... Remember that these restaurants serve dishes which have evolved from the inter-marriage of the Chinese and Malay peoples - therefore, a fusion of their respective cooking styles and ingredients.

During our past visit to Melaka, we called into the beautiful Restoran Peranakan in Jalan Tun Tan Cheng Lok. The restaurant is housed in a beautiful, historically-listed building. Standing outside, you are attracted by the ornate floor tiles. On entry, one must be impressed by the high ceilings and the authentic furniture and decor of a time past... you are taken back, imagining what it must have been like to assemble the family for an evening meal in this splendid old home. 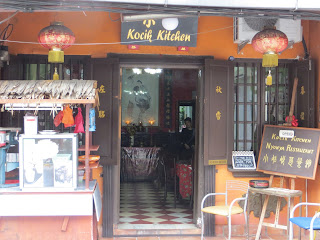 With the main course completed we wandered across the road to the Kocik Kitchen for cendol, a famous Malaysian shaved ice sweet, the basic ingredients of which are coconut milk, green pandan-flavoured jelly noodles, and palm sugar. In the heat of this tropical nation, cendol is always a soothing treat.

So, after lunch? The history of this place absorbs you... More grand homes in this former Millionaire's Row and many specialty businesses, some catering for tourists. We visited clothing shops selling the traditional Sarong Kebaya outfit and purchased the famous, delectable pineapple tarts, enough for the whole family.

In this historic section of Melaka you will walk a lot. Please take the time to absorb the sights and aromas of a time long gone!

We have enjoyed this wonderful dish in a number of Sydney restaurants, including one serving Burmese cuisine! As a result we have made our own version of this popular dish from west China, using the abundance of freshly dried chillies from our garden... not a part of Malaysian cuisine, but now firmly part of our repertoire. 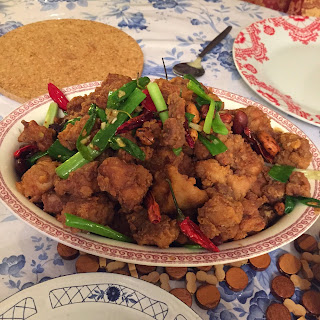 You will need to prepare…

Marinate the chicken pieces with… 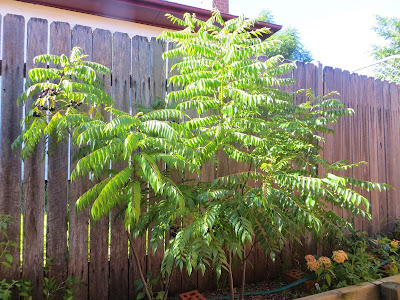 The Curry Leaf Tree (Murraya koenigii) is a delightful and highly useful plant, native to India and Sri Lanka. I have included this plant in my herb section due to its culinary properties but, in reality, it will grow into a small tree.

The fragrant leaves liberate their aroma when brushed, and we find the leaves a wonderful ingredient of our regular and varied Malaysian curry dishes. 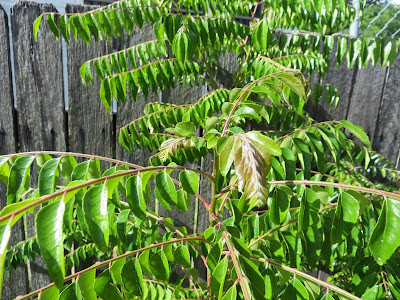 We were lucky enough to have been given some small plants by friends as house-warming gifts. By accident we discovered that one of the plants loved its semi-shaded position, whereas the second plant really struggled through its first summer to thrive in a full-sun position, necessitating its removal. Now, both plants grow happily side-by-side where only morning sun is available, handy to our kitchen.

Once established, the Curry Leaf Tree will produce white flowers followed by attractive red, then black berries. We have read that the seeds contained within the shiny black berries will sprout provided that they have not begun to shrivel, and that it is best to remove the surrounding flesh to facilitate sprouting... an experiment for next spring. 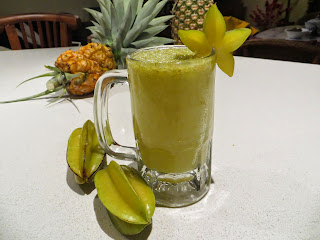 As we continue to harvest our first-time crop of star-fruits, we have been able to experiment with ingredients and flavours, our last effort being our best.

2.    Add star fruit, ice and water into blender and liquidise. 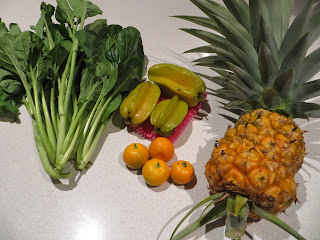 As autumn wends into winter, our weekend harvests are diminishing, but still plentiful...

The star-fruits have been used to make tasty juice, and our Smooth Pineapple, while mis-shapen, was delicious. Home-grown is always the way!

We are also fortunate to have Thai Basil (selasih) and Lemon Basil (kemangi) available for the next few weeks.

As our harvest of current vegetables becomes fewer, we will welcome the first pickings of snow and snap peas... and this week we will be planting out our yao mak (Little Gem Lettuce) seedlings - these make a superb stir-fry.
Posted by Colinas at 21:23 No comments:

Not to be Missed... The Fireflies of Kampung Kuantan

Having visited Bukit Melawati at Kuala Selangor, we could not neglect an opportunity to see the evening display of fireflies at Kampung Kuantan, just nine kilometres away.

Excursions take place from about 8pm until 10:30 on clear days... so make sure it is not raining. For RM15 per person, you will have a private boatman who will row your party, the whole journey taking about 45 minutes.

As our boatman rowed upstream, our first tree was barren. Yet the further upstream he rowed the more captivating our light show became. Here they were, thousands of flashing, enchanting ‘kelip-kelip’ in their 'berembang' tree homes. It was Christmas on a river. I was reminded of an older family member's stories of ‘bush’ torches, a jarful of 'kelip-kelip', and nights spent in the jungle during the torrid years of Japanese occupation of Malaysia.

During the journey we were not permitted to take any flash-photos... Please do check internet images because you will gain some understanding of what you might see.

For the local inhabitants the fireflies represent an opportunity to prosper from eco-tourism and they are diligent in attempting to preserve the 'berembang' trees and the fireflies which live within them.

Unfortunately, however, fireflies like so many other creatures are affected by the modern world. Visitors returning to this magical place will have noticed that the firefly population is in decline. One hopes that the local and international movement to preserve these beautiful creatures and their fragile environment from encroaching civilisation enjoys the greatest success.

Every person should see this...

To remind us of the fragility of our eco-system.
To reconnect us with the natural world.
To see what is real and magnificent in nature. 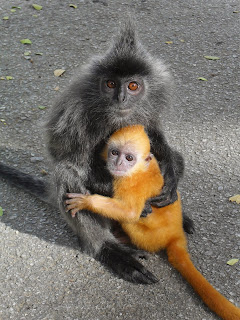 Bukit Melawati (or Melawati Hill) is an interesting place to visit, part of a day trip from Kuala Lumpur. Historically, the hill was strategically important to trade within the Straits of Malacca, and it was also home to the Sultan of Selangor.

Today it is a park, containing a lighthouse and some very old cannons. However these are not the main attraction. 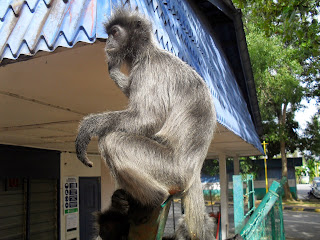 If you are travelling with children, this will be a very special experience for them. You are able to purchase a sugar-bag of vegetable treats from local sellers to feed the macaques and silvered langurs. Beware though, some of the animals can be rather bold and will happily clamber up on your shoulders if you are inattentively holding food. For the most part, though, it is a fun experience.

If you venture here mid-week, take care with the human traffic. Vehicles are permitted to enter the park, and this will interfere with your enjoyment of the animals. Weekends, however, are much busier and all vehicles must be stationed in the car park at the bottom of the hill. So, the choice is cars or crowds! 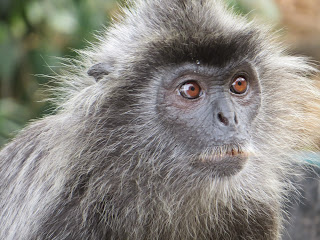 While in Kuala Selangor, seek out a seafood meal, and on dusk, you must go to the display of kelip-kelip, fireflies, at Kampung Kuantan, just a short drive from Bukit Melawati. This is a must-see experience. 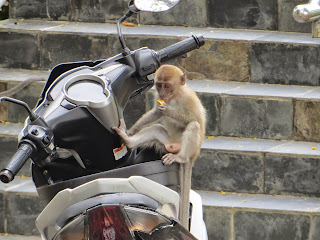 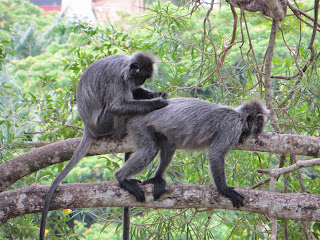 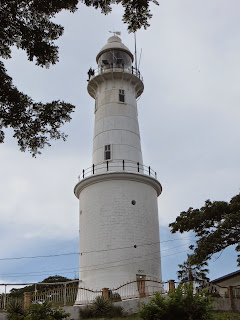 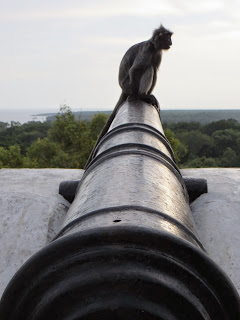 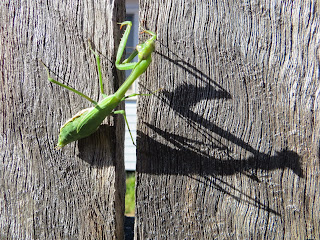 Highlighted by the oblique rays of the morning sun, this praying mantis looks a terrifying sight...

The praying mantis is a carnivorous insect which survives in a suburban garden on a diet of smaller insects. For this fact, it is most likely a valuable member of a home garden community as it devours insects more damaging to our plants.
Posted by Colinas at 21:42 No comments: 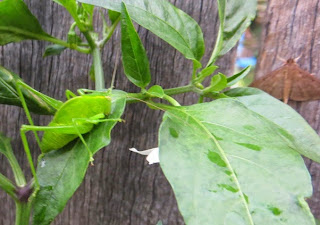 My reading suggests that katydids are normally leaf-eating insects. However, this photo suggests that the katydid is preying upon a hapless moth.

So, is it the moth, or the succulent leaves and flowers of the chilli plant which have attracted the katydid to our garden?

The last days of autumn have brought us our first harvest of star-fruit (carambola) this week. The fruit had a beautiful flavour but were a very 'siap-siap', leaving our tongues rather furry.

Our decision was to juice the first four stars. The resultant juice was satisfactory but we need to work on the balance of fruit to water and sugar. As we become happier with our juice-making skills we will post our recipe. As those of you have tasted this juice, it is one of the most delectable of fruit juices.

As a first crop ripening in the final days of autumn there is potential. We look forward to the next crop of fruit ripening through late spring and summer... it is to be noted that the tree continues to flower profusely through our cooler evenings, but is not setting any more fruit at the moment.

The Famous Pomelos of Ipoh 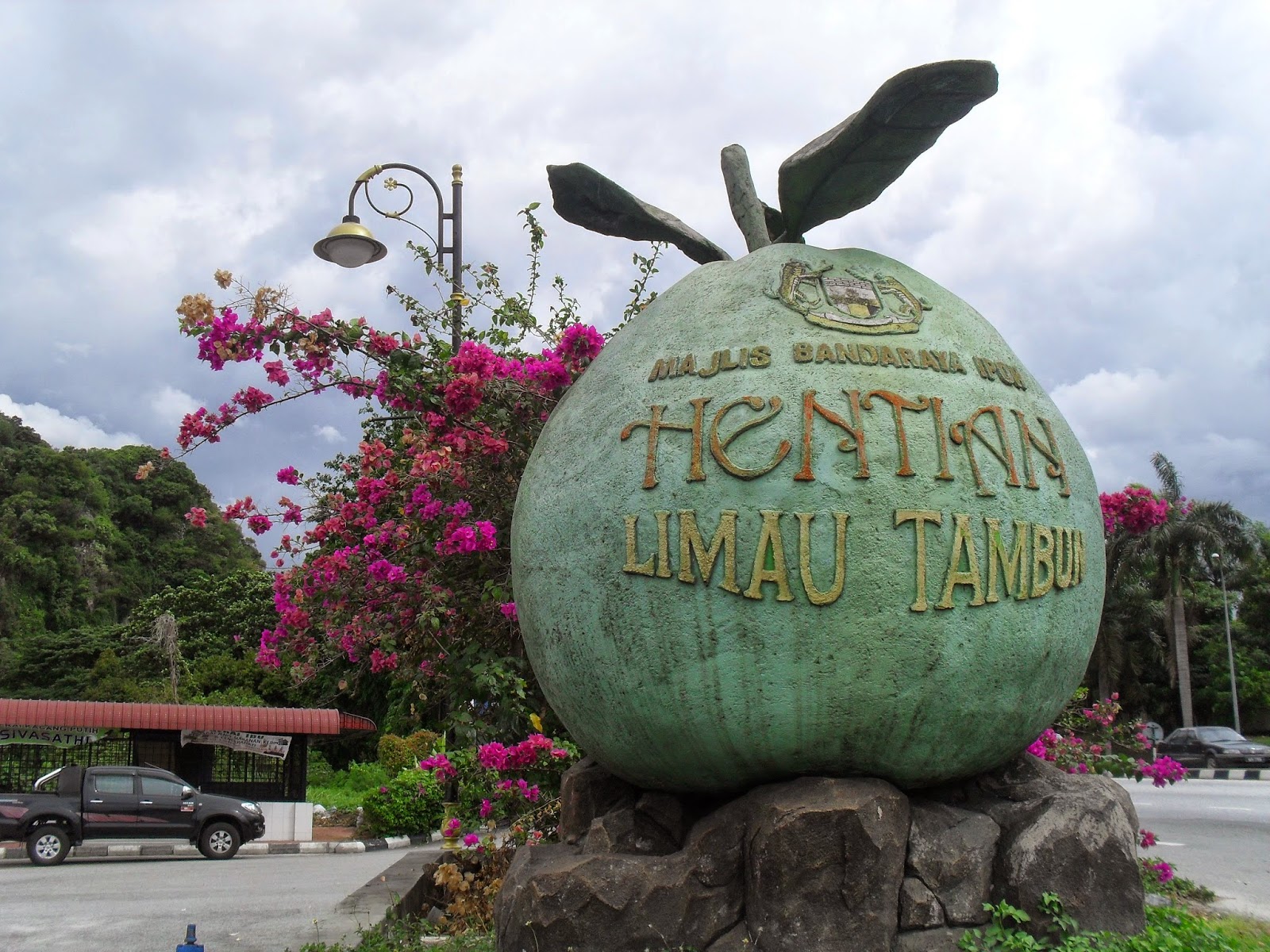 Ipoh is clearly the most famed place for pomelos in Malaysia. So what is a pomelo? With a scientific name of citrus maximus or citrus grandis, the pomelo resembles a huge grapefruit. However, it shares none of the sour flavour of a grapefruit, being rather sweet when grown under ideal conditions. Furthermore, it comes in two colours like a grapefruit, white and pink, the white fruit being more highly regarded in Malaysia. 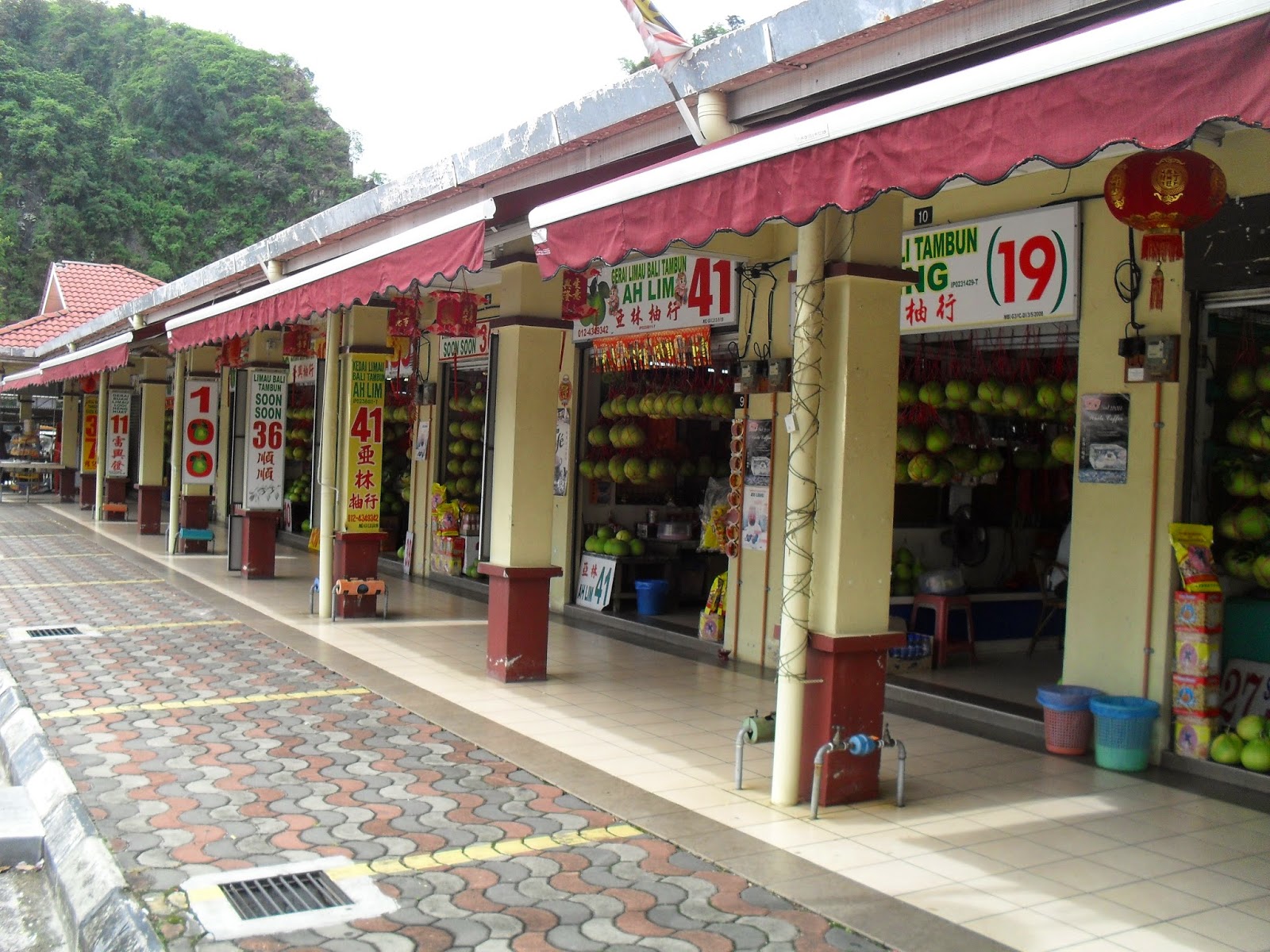 So, why are Ipoh pomelos so famed for their sweetness? My theory is that the tree responds to the limestone soils of the district, producing fruit of the highest quality. In fact, I intend to investigate this theory in our own garden by feeding our pomelo trees heavily with lime and dolomite. 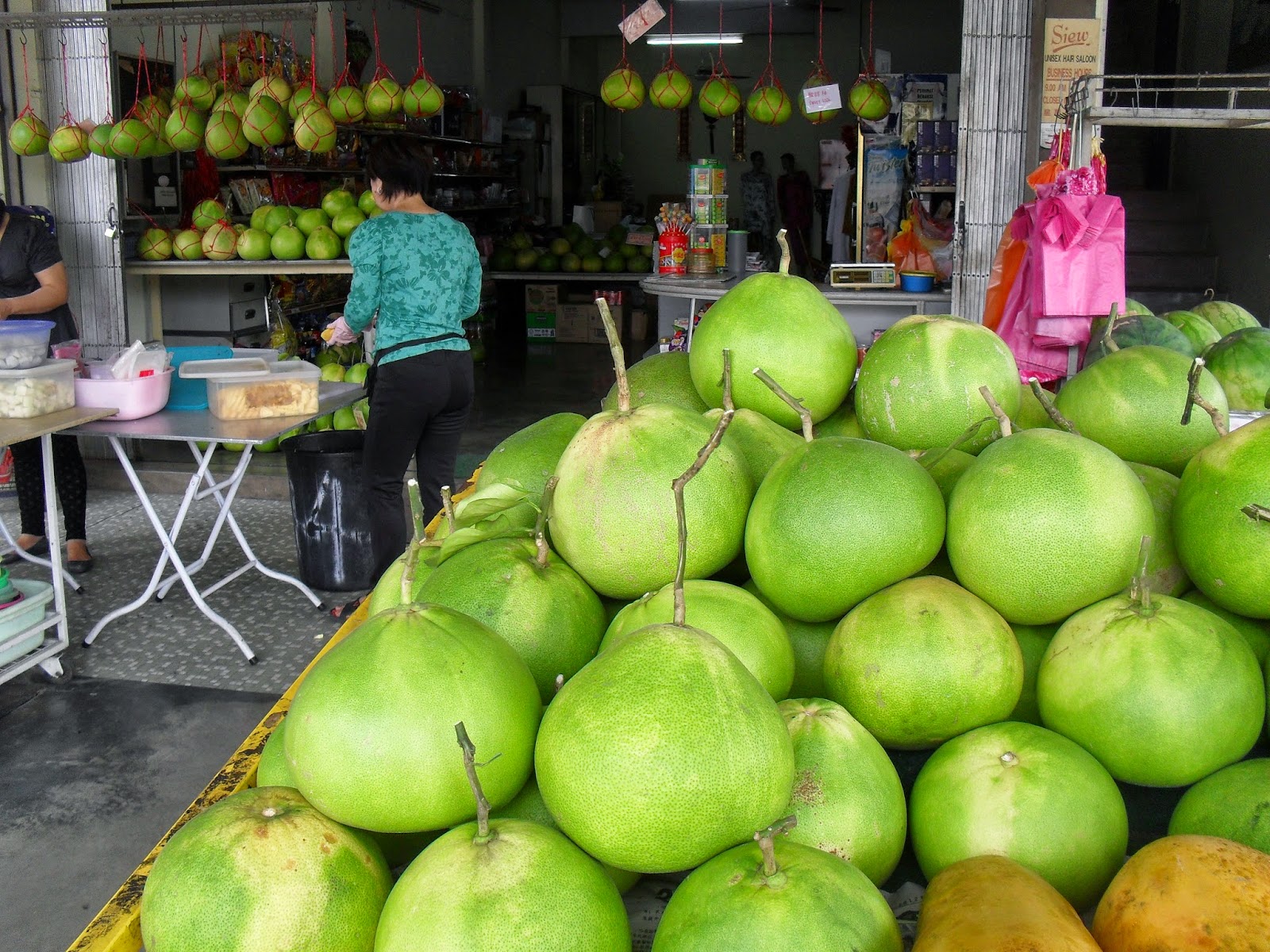 In Ipoh, one of the easiest places to find pomelos is at the Hentian Limau (Citrus Stop) near Sam Poh Tong and Ling Sen Tong Temples. Here there are many stalls under the one roof selling the famed fruit. Be careful, though... pomelos can be rather expensive here due to the passing tourist trade.

We prefer to purchase our pomelos at Jalan Tambun (Tambun Road) not far from the city graveyards. This is in fact the locale in which the highly sought-after fruit is grown.

Ipoh is one of our favourite places in Malaysia. For us, entering Ipoh via the main highway from Kuala Lumpur is a breath-taking sight, with limestone hills jumping from the surrounding landscape. These encircling limestone hills are a signature of an interesting city. 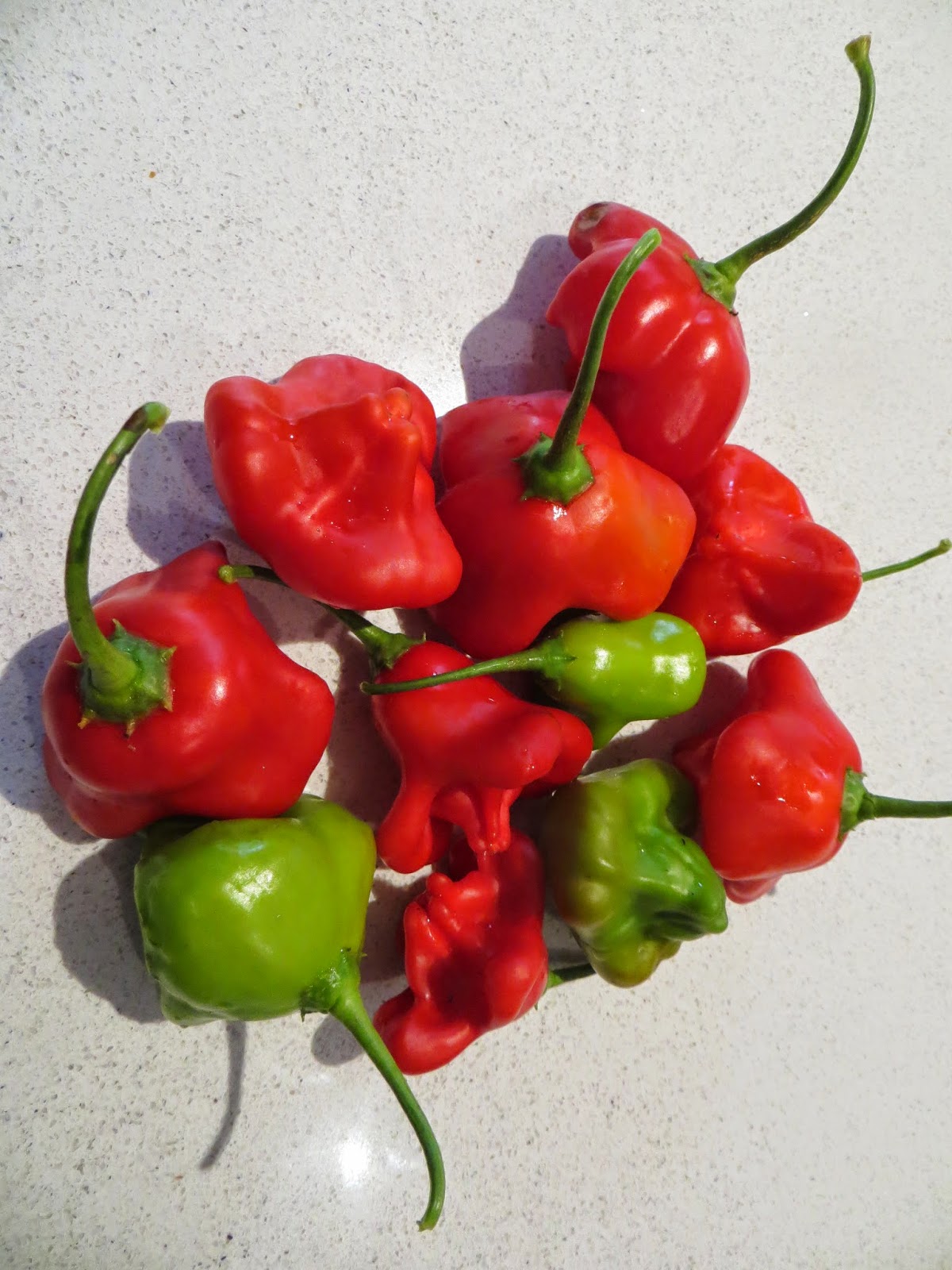 Masquerading under various names, the Bishop's Cap Chilli (Christmas Bell, Peri Peri, Joker's Hat) holds a special place in our garden: it is highly ornamental and very useful. Under ideal conditions the plant can grow over one metre 50 in height. In fact, one of our seedling plants has looped over our one metre 80 back fence this season. However, as the spectacular display of green and red 'flying saucers' develop, the willowy branches of the shrub will bend to a lower height.

The plant is easy-care, with some judicious pruning when the danger of frost has passed, moderate fertilising during the spring months and some extra irrigation during dry times. The biggest challenge with this chilli is warding off attacks by fruit fly. With a Cera Trap located close to our Bishop's Caps, we have enjoyed a successful harvest of tasty treats this recent summer and autumn.

In the kitchen this is an adaptable chilli. We use it for colour in rice, noodle and vegetable dishes. As a substitute for capsicum, simply by removing the seeds, the Bishop's Cap holds a very mild heat. It fact the wings are rather crisp and sweet. 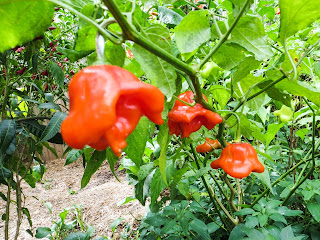