A Tale of Two Jackfruits

During March, April and September, I reported on the progress of our more advanced jackfruit tree. In the autumn months, the tree produced a large number of flowers but over winter no fruits developed. A second small flush of flowers occurred during September with the same result. Since that time the tree has suffered a setback, losing many of its leaves and failing to produce any further flowers.
Growing jackfruit trees in the temperate climate of Sydney is a learning experience of the highest order. Has this first tree been affected by the cold of winter? Has it acquired a disease? Has it lacked nutrition or been affected by ‘wet feet’? I incline towards the first alternative… although our cool season has not harmed the tree to this extent in the past four years.

By contrast, our second jackfruit tree, of the same age, but clearly a different jackfruit variety, is thriving. It has grown very large and has started to produce multiple flowering spurs… side by side with, and growing under the same conditions as, the ailing tree. So, wherein lies the answer?


As these fruiting spurs have developed in the summer months, do we have a greater expectation of first-fruit success this time? With time to maturity being about five or six months, we have time to wait… and learn! 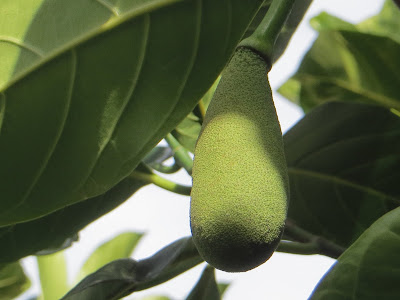 Since March I have learned that the male and female flowers of jackfruit can be differentiated by colour: female flowers are a darker green than their male counterparts. It is also a possibility that many male flowers will appear before a female flower is produced on a fruiting spur. So, what do the photos of our tree show?

The video link below (from Malaysia) is very useful and informative, showing how to distinguish between male and female flowers of the chempedak, a ‘cousin’ of the jackfruit tree. Incidentally,the audio is recorded in both Malay and English, so it can be understood without a knowledge of the Malay language… 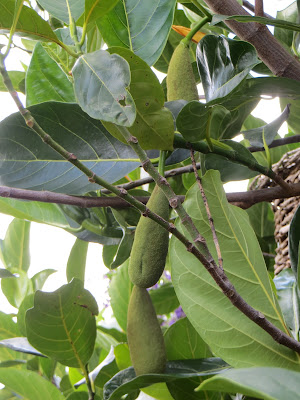 Regardless of this season’s fruiting outcome, a jackfruit tree remains a very handsome and fascinating tree, even in the warm, temperate climate of Sydney, at the very edge of the cultural range of the species. 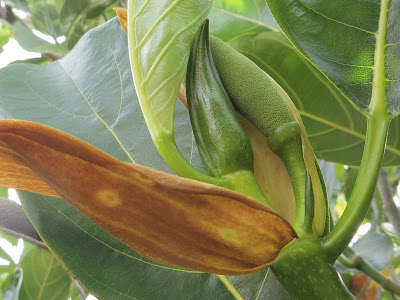 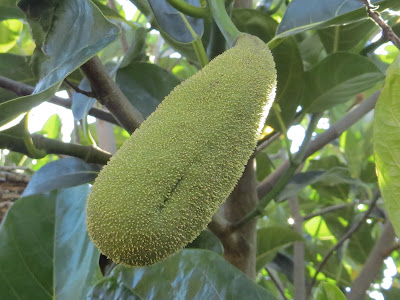 Wishing you hours of enjoyment and contentment in your garden…
Posted by Colinas at 09:53