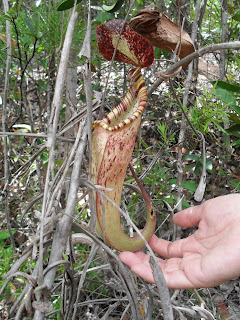 Bako National Park borders the South China Sea and is very close to the city of Kuching in Sarawak, East Malaysia. Because of its proximity to this major city, it is truly worth a visit. However, you need to be prepared to walk.

The park consists of a number of nature trails. These range from easier forest trails up to full-day rainforest treks. Because of the variety of its trails, which contain a huge array of Sarawak's vegetation types, it has become a very popular destination for visitors and tourists.

During our visit to Bako National Park, our first stop was at Kampung Bako fishing village. Here, we organised motorboat transport with two other couples. Then, ten minutes later, we arrived at Teluk Assam where we registered for our trek. 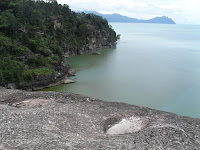 We selected to walk to Teluk Pandan Kecil, a distance of 2.6 kilometres. This was recommended to take 2.5 hours. Along the way, we passed through sections of closed rainforest, then open scrubland, along speedway platforms, up bush ladders and goat tracks, and finally down steep gorges. At times, it was wet but sandy, rather than muddy under foot.

We witnessed wonderful sights… bush orchids, pitcher plants… and eventually, the cliff-face and cove beach at Teluk Pandan Kecil. Here, we met an Aussie couple, who invited us to join their boatman to remove to Teluk Paku, home to a colony of proboscis monkeys. The short boat trip was stunning: we passed some spectacular island and rock formations set in the jewel-blue sea. 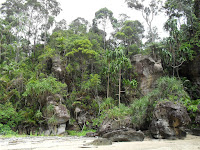 On arrival at Teluk Paku, I was fortunate enough to catch a glimpse of a proboscis monkey in the cliff trees adjoining the beach. With confidence of sighting more of this endangered species, we took the track back to Teluk Assam, 0.8km, for 45 minutes. The walk was very pretty, but our luck had run out, for we did not spot another proboscis monkey… even though those walking before and after us had ample fortune. Sayang!


Back at base, we rehydrated and took a simple meal. Here, it was interesting to note the 'wild' animals which prospered from human company, particularly macaque monkeys and Bornean bearded pigs. 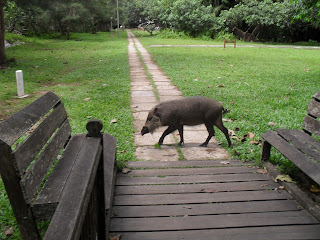 Finally, we met up with the original couples to take the motorboat back to Kampung Bako. 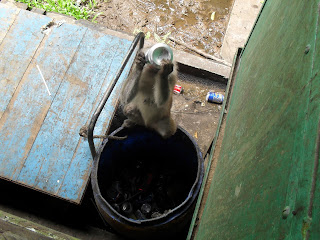