The Cuckoo Has Landed

For some time, perhaps three months, we have been fascinated by a melodic but unfamiliar bird call, emanating from a magnificent Silky Oak tree, three doors up from our home. Judging by the volume and clarity of the call, the suspect bird needed to be a very large one. Almost every evening we have noticed its lovely call, making us determined to locate and distinguish the source.

This morning, with a 400C (1040F) day forecast, the garden needed to be watered well to withstand the searing temperatures. As I completed the watering of young plants in pots, there was a rustle at ground level. Suddenly, a large mottled bird flapped up on to our garden seat. A little apprehensive, but not overly frightened, the bird tolerated my presence and began to cheep, at first regularly, then later demandingly: it was clearly a baby seeking out its mother. 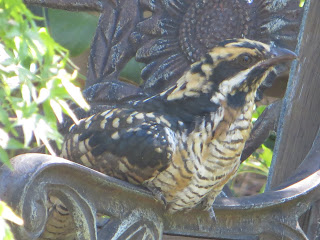 Its behaviour appeared to indicate that it had come to our yard in search of water: it sipped droplets of water from the leaves of our blooming jackfruit tree while it waited for its parent to respond to its cries.

Having photographed and videoed the performance, I retired to the house to research the bird I had stumbled upon. It was an Eastern Koel (Asian or Pacific Koel), a member of the cuckoo family of birds. According to my research, the black, male Eastern Koel migrates to northern and eastern Australia from Papua New Guinea and Eastern Indonesia during September and October for the purpose of breeding. The buff-cream and black-barred females arrive soon afterwards.

Because these birds are members of the cuckoo family, they parasitise the nests of some larger native birds. Keeping in mind that the young Koel is an enormous bird, it must be quite a trial for their foster parents to feed a most insistent baby.

The Koels fly back to warmer climes in March, so we should have the pleasure of the melodic song for a few more weeks. Whether, we see the birds again is another matter: they are apparently very shy.

The videos can be viewed here… and here…