A Tale of Mango Ripening… It’s Almost That Time

The last mangoes of the season are now entering our Sydney stores. Beginning in October in the dry tropics of the Northern Territory, then from December in northern Queensland, delectable mangoes are with us. Ripening of the much-sought-after fruit continues south along the Australian east coast right into March. At the moment, there are still some commercial mangoes available at a very exorbitant price. I spotted Australia’s most famous mangoes, Kensington Pride mangoes, for more than $5 apiece yesterday. These are probably from growers in northern New South Wales… Compare this with the high season (January) price of around $1 each for Queensland-origin fruit.

I do remember my Dad’s old mango tree. Grown from a Kensington Pride seed, the tree became bigger than the house itself.  Most years, it produced a mere handful of fruit, its flowers stems blackened by anthracnose every October. However, the fruit which it did hold until maturity in the third week of February were enormous and so flavourful, even in Sydney’s cooler southern climate… provided that the fruit bats left any for us! The tree was so tall that I was prompted to purchase a mango retriever net at a flower show during a holiday in Bangkok, Thailand. Back home, I lashed the net to a painter’s extension pole so that we could beat the fruit bats to our prized mangoes.

Then there was 2009. Dad had passed on. Mum had had a fall and was hospitalised. I drove 500 kilometres from my southern New South Wales home every Friday… and returned on Mondays… looking after her and the home… and the mango tree! This particular year, it had not rained for a long, long time – unusual for this time of the year in Sydney. We would set the sprinkler running under the mango tree and visit Mum in the local hospital. The flowering season came upon us and, for once, due to the lack of rain, there was little or no anthracnose to damage the tender flowers of the old mango.

February came. What a year! The stately tree was magnificent… 120 mangoes came down with the Thai-procured net, me balancing on a rickety ladder. Even then, the bats were able to smell out a few green-tinged mangoes, camouflaging in the leaves of the canopy of the mango tree. Friends, neighbours and children feasted on the surfeit. One memorable, behemoth mango tipped the scales at two kilos… Try eating that without help!

This was the last hurrah of a grand old tree…

The following seasons were wet and the flowering was poor, dampened by the dreaded anthracnose. Furthermore, the tree had continued to grow. It was now covering the back parts of the home. It was dropping slippery-when-wet leaves by the garbage-bagful. Its roots had lifted the pathway. The tree had become a life-threatening hazard for my Mum, because another fall might see her off. Our beloved KP mango tree had to go! We could have cried… because the better half’s Mama had chopped down a large Nam Dok Mai mango tree in similar circumstances in Ipoh, Malaysia, too. Shared grief! More than 35 years old, my Dad’s KP mango tree was a landmark, and would have been one of the largest specimens in Sydney.

There would be no more February mango feasts!

The Kensington Pride is a mid-season mango in its usual sub-tropical habitat. However, in the southern climes of Sydney, it ripens right at the end of summer. Late season varieties mature even later, well into our autumn.

So, how is our young Maha Chanok seedling?  Definitely, a later variety, our seedling still has three superb mangoes hanging in the tree. One 400-gram fruit developed its signature pink shoulder at the start of February. We removed it from the tree, ripening it in our bag of rice. It did develop its lovely aroma, but unfortunately, not the delightful flavour we experienced with last year’s little crop. Disappointing. 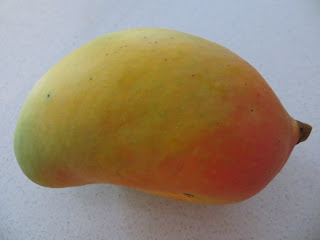 The three remaining mangoes will be left to hang on the tree until the end of March before picking. With plenty more days of Sydney autumn heat ahead, the fruit should acquire its legendary taste and texture… And the net? It will not be required. 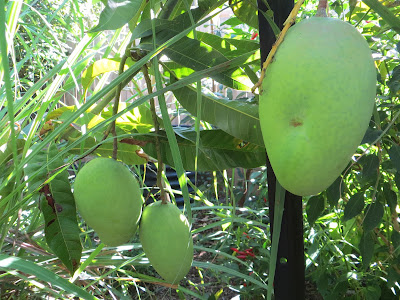 The tree is just head-high. 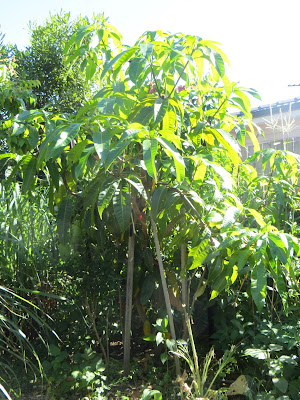