During February last year, we had the good fortune to stumble across potted specimens of two beautiful, flowering gingers. Of all unlikely places, they were purchased at our local fruit shop.

The ginger plants were kept in their pots in a shady location throughout the warm autumn months, simply keeping them well watered. They remained in their pots right through winter, the plants dying back as the colder weather of May set in. Finally, with the arrival of spring, they were transferred to a specially prepared garden bed.

The selected ‘gingers’ bed was in a semi-shaded environment. Having seen wild beehive ginger plants, growing contentedly at the shaded feet of forest giants in the jungles of Malaysia, we were not prepared to ‘risk’ a full sun location… Australian summer sun can be very fierce! At the time of planting, the dormant gingers were well fertilised with pelletised chicken manure and heavily mulched to suppress weeds. In addition, a number of chilli plants were allowed to grow as cover for the gingers, whose first shoots were unfurled in early November.

Along with the flowering gingers and protector chillies, the ‘gingers’ bed contains common ginger (Zingiber officinale) and turmeric (Curcuma longa). These are grown for the table rather than the flowers.

Come February, after three months of leafy growth, the first of the gingers flowered again. This was the lovely Siam Tulip (Curcuma alismatifolia) with its delightfully attractive pink torch flower. 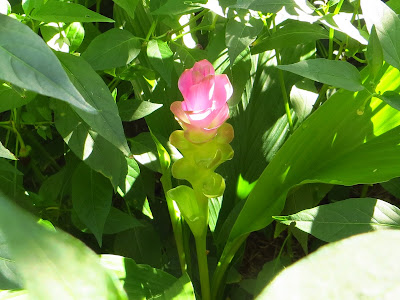 As an interesting aside, this ginger has become the centrepiece of eco-tours in Pa Hin Ngam National Park and Sai Thong National Park in the Chayaphum region of Thailand.

Just a few days later, the flowering of the Siam Tulip was succeeded by the pendant, appropriately-named blooms of the Dancing Ladies Ginger (Globba winitii). 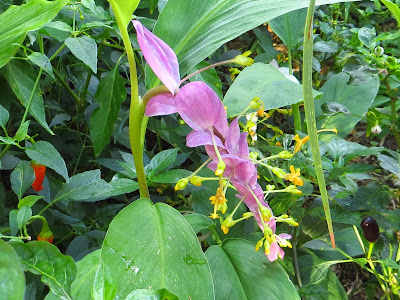 Not only are these two gingers interesting floral specimens, they will also maintain their flowers over a period of two months or more, creating an eye-catching display.

With further good fortune, a few weeks back, we were able to purchase another gorgeous Siam Tulip, this time a white variety. This white Siam Tulip is a smaller plant than its pink namesake. When it is added to the dedicated ginger bed in the coming spring, it will need to be given a ‘front-row seat’ to show off its brilliant flower heads. 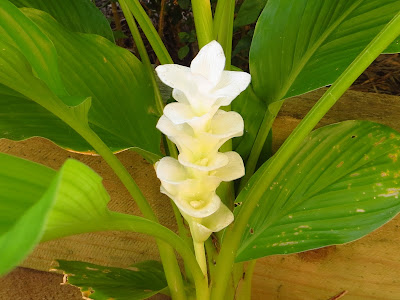 Now, there is one more flowering ginger which we have been attempting to grow. It is the very impressive beehive ginger. After four years of struggling to gain a foothold on life, our ‘beehive’ is finally beginning to flourish, putting out a number of healthy vegetative stems. Unfortunately, we have not as yet been blessed with flowers… Perhaps, the temperate climate of Sydney is just too cool for this beautiful ginger to bloom… Nevertheless, the plant has found a comfortable home at the foot of one of our jackfruit trees.

Over the past four years, we have become accustomed to the growth cycles of our turmeric plants, in particular. Applying similar principles to the establishment of our flowering gingers, we hope that our attempts to naturalise these beautiful plants will be successful, allowing them to prosper and multiply.  In fact, it would be lovely to have more than one colourful pocket of these summer and autumn bloomers in the garden.
With the colder weather of May approaching, it is time for one last feed of these delightful plants.