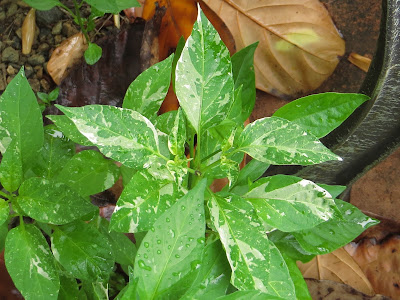 Sometimes, one can be surprised by the gifts passed on to you by other gardeners, especially if that gift comes in the form of seed.

Seven years ago, my mother was given two sets of chilli seeds by a friend, aware of my interest in growing them. Unaware of what we had been given, but very grateful for the gift, the seeds were planted in my mother’s garden… and promptly forgotten! Some weeks later, a group of four or five pretty little plants had sprouted. To our surprise, the plants had lovely variegated leaves.


The little plants were lifted and grown on in the Colinas garden. Within weeks, some beautiful white flowers appeared to be followed by the most unusual striped fruit in shades of cream and lime green. To the internet… 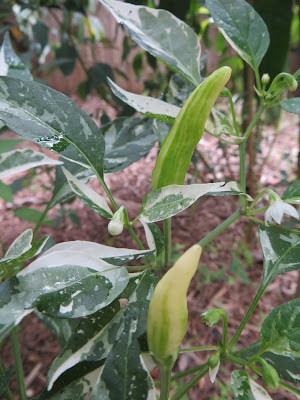 The chilli was Fish Chilli, a variety of Capsicum annuum, an heirloom variety… an absolutely wonderful gift!

It is believed that Fish Chilli originated in the United States in the coastal areas around Baltimore and Philadelphia. The African-American communities used the cream-green, immature form of the chilli to season creamy oyster and crab dishes. The fish sauces would retain their cream colour, untainted by the colouring of red chill, but would have a surprising piquancy. The origin of this chilli is a fascinating tale in itself and there is an interesting recount of this at Garden Betty. 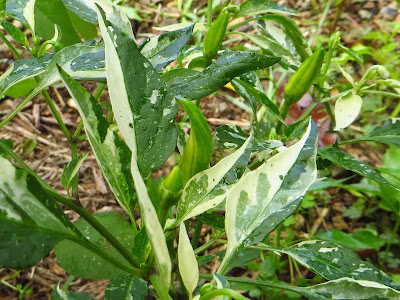 Fish Chilli is not a tall plant, growing to about 50 or 60 centimetres in height. It is beautiful at all stages of its growth: When the cream-green, immature pods ripen, they become orange with red stripes, some remaining totally red. 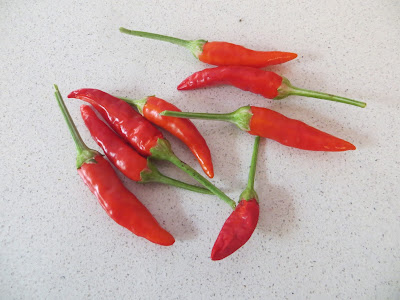 Like all Capsicum annuum plants, the Fish Chilli has a disconcerting, or fascinating habit… this depends upon your attitude, of course. If it is close planted with other Capsicum annuum species, the wind and insects performing their pollinating duties, its progeny will develop characteristics of the nearby plant… Unusual colour forms will appear in your garden… If you wish to retain genuine Fish Chilli plants generation after generation, it must be planted at a distance from other chilli plants. Be warned… the albino variegation of the Fish Chilli is a recessive gene: it is possible to lose the original characteristics of the plant over time, even in the first new generation of seedlings.

On the positive side, the remarkable variegations of the Fish Chilli might well be passed on in other plant forms and colours.


It is a worthy plant for all gardens, a curiosity of the chilli family.