It is disappointing to lose one of the most beautiful plants in your garden. In the case of frangipanis, however, the problem has a solution...easy, but not preferred.

At the start of spring, our Fruit Salad Frangipani was struck down with collar rot. It is my belief that the disease was induced by its heavy layer of mulch. Under normal conditions, mulch is an asset to a garden, because it acts to conserve valuable water and limit nutrient-stealing weeds. However, the thick mulch had been pushed up against the trunk of the plant, creating an overly damp environment. The probable vectors of the plant's demise were a pair of Common Blackbirds (Turdus merula) which regularly scratched and fossicked in the mulch in search of worms and other garden organisms. The lesson has been learned the hard way: ensure that the mulch stays right away from the trunk of the plant… especially with the presence of blackbirds!

Apart from the physical symptom of collar rot, a type of ring-barking of the trunk at ground level, the frangipani appeared ‘delayed’, rather than dead. For some time, we were puzzled that the plant was not flourishing. Flowers had been produced right throughout the spring and summer, but no leaves, only juvenile leaf stubs were present, giving an appearance of life. This behaviour was clearly a signal: the tree continued to flower in hope of re-creating itself before it died.

Sadly, the tree will need to be removed.

Fortunately, frangipanis are relatively easy to grow from cuttings. Not only tips, but also full branches can be struck to create new plants. 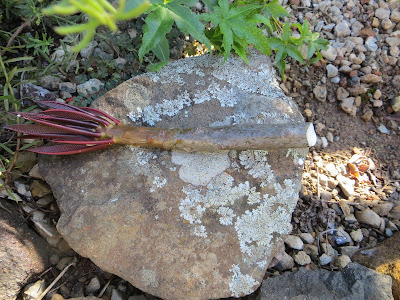 When you take your cuttings, ensure that the milky sap flowing from the cutting has dried. Some people will recommend leaving your cutting to dry for a fortnight before potting up. I even know of a person who successfully struck a frangipani cutting after neglecting it for months.  For me, two days of drying out is sufficient.

Once potted, do not over-water your frangipani cuttings: water sparingly every few days, because frangipanis resent having ‘wet feet’.

Our original Fruit Salad Frangipani was cutting-grown and had shown that it was a fast growing variety, reaching over two metres in its first three years. The replacement cuttings are showing the same, energetic growth habits and have quickly established over the past month. They will remain in their pots through the winter months. However, when the weather warms again, the strongest cutting will be selected to replace our ailing frangipani. No-one wants to lose one of their favourite trees. However, we can be thankful that frangipanis are so easy to replicate!


Wishing you hours of enjoyment and contentment in your garden…