Sometimes, one can overlook the most interesting attractions in a new location. So it was with us. In our obsession to find a place to dance in Kota Kinabalu, we neglected to research properly our second love in Malaysian towns – the night markets. Full of life and colour, with interesting stalls and tasty finger food, night markets deserve one’s attention.

Kota Kinabalu is in East Malaysia, the capital city of the state of Sabah. We spent five days in Kota Kinabalu. However, we did not find their splendid night market until our second last evening. Even then, this was a chance finding.

As night started to descend on our penultimate evening in Sabah, we sought out the Rumba Latin Bar and Grill, looking for a dance venue. The name sounds like a dance venue, doesn’t it? Nobody, even taxi drivers could tell us where it could be found, so we searched among the bars along the waterfront. We had no luck… no dancing tonight… but we did enjoy a lovely meal before a stunningly beautiful sunset descended upon us. 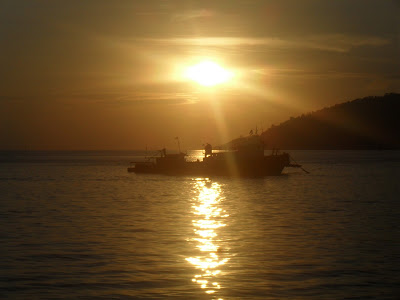 When darkness arrived, we spotted the lights of the night market stalls: it turned out to be one of the best night markets we have experienced in Malaysia. The main attraction was the fresh, very fresh fish which was being unloaded from the boats and placed on stalls as we looked on. Further along, stall-holders were preparing and barbecuing fish. The alluring smell of the barbecue and the hazy, smoke-filled atmosphere drew us in its direction... 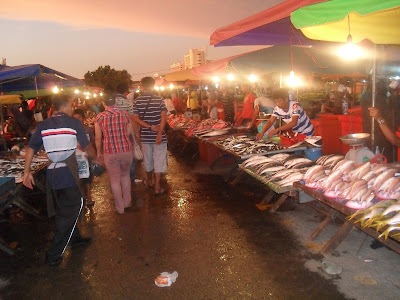 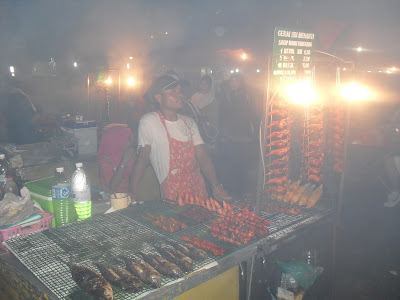 There was a vast array of other kedai, selling apong balik (folded, crunchy peanut pancakes) and other cakes, banana fritters, curries, ice drinks, fruit, spices and vegetables. Ironically, late in our trip to Kota Kinabalu, we had discovered that this would be open every night… tomorrow night, aisle 3, seafood dinner!

So, just before dusk the next evening, we sought out another beautiful sunset – and we were rewarded amply again, taking many superb photos of the harbour and its watercraft, the Waterfront and Le Meridien Hotel, draped in golden sunset hues. 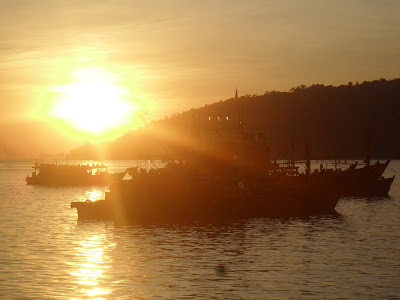 Once the sun had set, we sought out our fish chef in aisle three: we relished a Tuysilla fish, an enormous tiger prawn each, and a skewer of ten squid, all barbecued in tasty sauces. The fish was a little under-done. However, the chef was very amenable to cooking it for us for just a little bit longer. Eyes bigger than our bellies, we had ordered too much. Satisfied? Yes. Definitely. 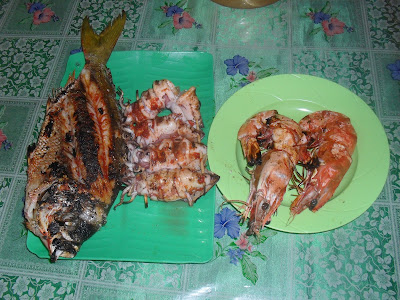 As difficult as it was to walk with a belly full of fish, waddling like pelicans, we decided to wander through each of the night market aisles, shopping for goodies for our return flight to West Malaysia in the morning. Sweet Filipino mangoes fell into our basket, along with apong balik, ube and pisang goreng (sweet potato and banana fritters), onde-onde (pandan, coconut and palm sugar dumplings) and kue lenggang (coconut wrapped in a pandan-flavoured pancake). 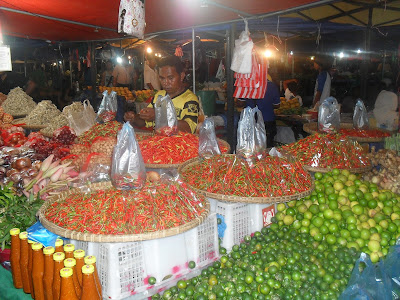 Then, to top off the bloated feeling, we enjoyed a very simple dessert of ABC (Ais Batu Campur or Ais Kachang).

Memories of our stay in Kota Kinabalu and Sabah are held warmly in our hearts, the night market being high on our list of places to revisit. In fact, this year, we had mapped out our second coming. However, on advice from the Australian Government website, ‘Smart Traveller’, we have decided to forego this pleasure until a later time.

By the way, the Rumba Latin Bar and Grill is inside Le Meridien Hotel!
Posted by Colinas at 21:35