One of our constant garden ‘friends’, the Net Casting Spider has made itself at home around the eaves and even the footings of our home… this, despite regular clearing of webs.


It is called a Net Casting Spider because of a curious and unique habit… they create a small web, held between their four front legs which can be opened to ‘net’ passing insect prey. The unwitting prey may be passing by foot or even on the wing! Being a nocturnal animal, you are most likely to encounter a Net Casting Spider ‘at work’ towards the evening hours. Their regular diet consists of other insects, namely ants, beetles, crickets and other spiders.

Should you be unable to observe this little creature around your home, it regularly leaves behind another tell-tale sign of its presence, especially during the summer months – a tiny, suspended globe of eggs, cream in colour flecked with brown. 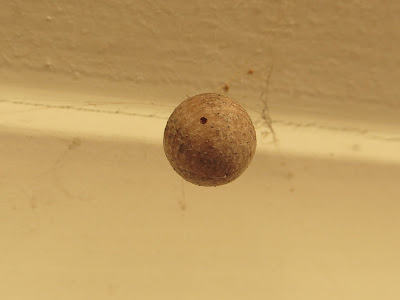 According to the Queensland Museum, one severe human reaction to a bite from a Net Casting Spider has been recorded.