Yesterday marked our first harvest of the delectable Asian Winged Bean. Known in Malaysia as Kacang Botol (See Kak Tao or Sei Lim Dao are its names for the Chinese residents), it has been an absolute excitement to pick our first seven pods. 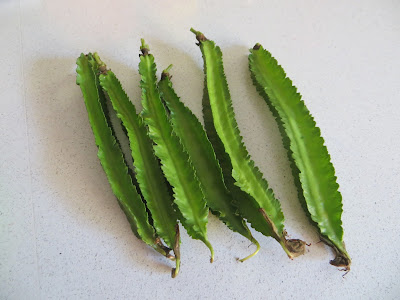 Why, you ask? Well, seven packets of seeds were purchased on-line between us and our close friends, three years ago. Following the seed-merchant’s instructions, the seeds were soaked in hot water before planting. Once they had swelled, they were taken outside and planted against a warm west-facing fence. Then we waited… and waited… We tried again with another packet of fifteen seeds, following the same procedure. And we waited with baited breath again. This time, one plant popped up. Throughout the growing season, it struggled and when the first winter frost came, it died. We promptly forgot about it. Our attempt at growing these most delicious of vegetables was a total failure… and our friends reported similar results in their attempts to grow the plants. We presumed that it was not possible to grow the plants in Sydney.

We were resigned to purchasing the expensive Kacang Botol during our occasional shopping expeditions to the Sydney suburb of Cabramatta. It would become a once-a-year-treat!

Just to tease us, the little Kacang Botol plant poked its head out of the soil the following spring. Again, it struggled to survive, promptly disappearing when the cold weather returned.

Then, this season arrived. The Kacang Botol plant appeared for the third consecutive season. We gave it a liberal feed of pelletised chicken manure and promptly forgot about it. It grew… and grew… and grew… I was forced to erect a rudimentary wire trellis so that it could climb. Two weeks ago, it climbed on to the roof of the neighbour’s garage! I was beginning to wonder whether these were the seeds from the children’s story, Jack and the Beanstalk! Maybe, I should simply have thrown the seeds on the ground like Jack’s mother… They seemed to thrive on neglect! 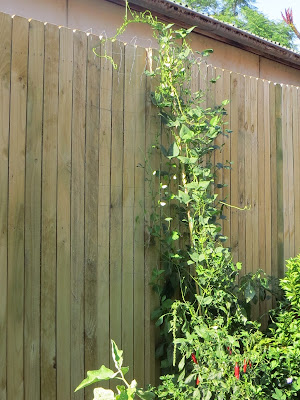 So, yesterday was a red-letter day. Only seven pods, 12 to 15 centimetres long, were harvested but there are many more exceptionally beautiful blue flowers and juvenile beans appearing on the vine. This is why we are so excited: no need to drive to Cabramatta in the hope of coming across a feed of delicious four-angled beans. 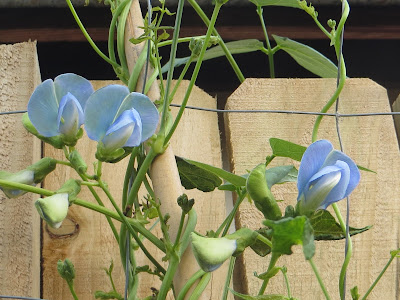 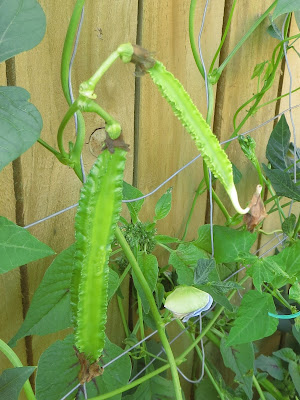 Now, to answer the key question. Why have the beans thrived this season after failing for the first two years? Simple! We erected a new dividing fence… This probably sounds irrational to you. However, when the old ram-shackled fence was removed, with my trusty mattock, I was able to stump out large stands of one of the most abhorrent noxious weeds from the neighbour’s side of the fence. Green cestrum (Cestrum parqui) has pretty tubular yellow flowers but it is highly toxic and highly invasive. In addition, it stinks! Clearly, it was exhausting the nutrients of the desirable plants on our side of the fence. Once the stumps of the villainous shrub had been surgically removed the Kacang Botol thrived. Failure turned to success! 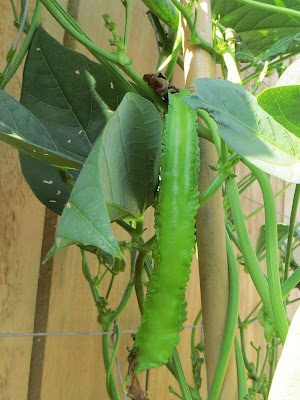 Winged beans begin to flower as the length of daylight shortens. Our first beautiful flowers appeared in mid-March. Two weeks later, the first beans reached harvest maturity. The persistent warm weather this season has helped the flowering and fruiting of this most desirable plant.

In a conversation with a Cambodian friend yesterday, we learned that the Kacang Botol prefers a shady location in her homeland. As the season progresses, we will allow some of our pods to brown off in order to collect the seed. Next year, we will follow her advice, putting a second plant in a new, more shaded location.

Wishing you hours of enjoyment and contentment in your garden…
Posted by Colinas at 09:44