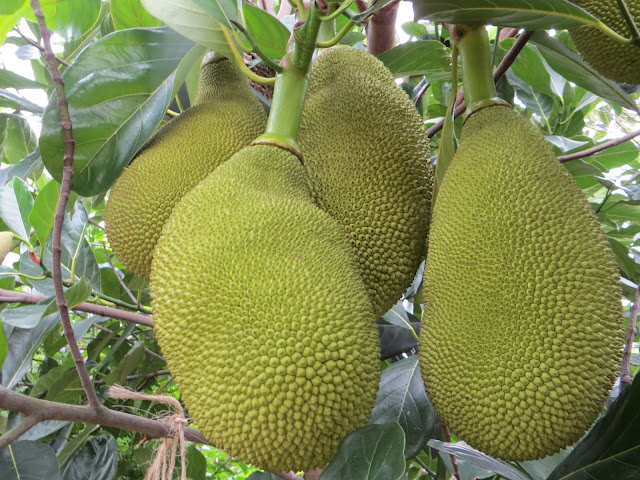 Winter is encroaching. The days are cooling: our warm, ‘Indian-summer’ appears to have left for the moment. Following overnight storms, the winds have picked up, giving the impression of cold. Just as people dress to combat the cold, what precautions need to be taken with a valued and valuable plant? Does it need to be dressed too?

Over the past few weeks, I have done a lot of research and reading in an attempt to uncover successful methods for over-wintering developing fruits of the jackfruit tree in the Sydney climate… there is precious little information on the internet about growing jackfruits in a cooler climate.

Members of our family in Malaysia had indicated to us that the developing fruits should be covered. Obviously, however, this had nothing to do with cold weather! Rather naively, we failed to inquire about the purpose for covering the fruit. Luckily, I came across a blog from Indonesia – yes, I can speak the language – which indicated that this was necessary to combat fruit fly infestation.  In our case, when the jackfruits began to develop in January, we took the precautions of removing our declining tomatoes and hanging fruit-fly attractant pots throughout our yard. The issue appeared to have been resolved as evidenced by the number of floating fruit fly corpses in the liquid of the traps.

So, should we cover the jackfruits to protect them from winter cold? We still had no answer.

Last week, I stumbled upon a brief blog comment from a Sydney jackfruit grower about his/her experience. Each year, his/her jackfruits, presumably left uncovered, would form nicely over the end of summer and through the autumn. However, when the winter arrived, the fruits would begin to rot from the stem. Was the damage as a result of cold?
This brief web entry prompted me to think about methods of protecting the developing fruit during the cooler months. With a large number of fruit on the four-year-old tree, I have decided to experiment… So, what to use as covers?

Residing in the back of our garage cupboard was a banana bunch cover. Bunch covers are two-coloured: the grey side is intended to reflect the strong rays of the sun, the coloured side being on the shady side of the bunch. Bunch covers have a reputation for being highly successful in improving the size and condition of bananas. Cutting the long bunch cover in half became my first solution for the covering of two larger jackfruits.

Reflecting upon the images I saw in the Indonesian blog, I cut open the bottoms of some old 10-kilogram rice bags, sliding these over two more developing fruit. Like the banana bunch covers, these would be impervious to rain, and perhaps, would provide sufficient protection from the occasional frosty morning.

Some years ago, when we first planted our jackfruit, mango and starfruit seeds, we wrapped the little plants with fabric frost covers. Recycling these covers to wrap more of the jackfruits became the next priority. The frost cover will do its job: it is not impervious to winter rains but it will keep the frost from the fruits. In fact, I took the precaution to wrap some leaves within the frost fabric. The leaves would keep the fabric at a distance from the fruit, providing a degree of insulation.

My final decision was to leave some of the smaller jackfruits to their own devices. Would the canopy of the tree itself provide enough protection over the colder months leading to the harvest of succulent jackfruits in the warmer months?

At this point in time, I have not sealed any of the covers, the bases remaining open to the elements. While we continue to have relatively warm days in the low to mid-20s (Celsius), I will leave the covers open. However, in the next few weeks, I will seal the covers with clothes pegs, giving the jackfruits total protection on the coldest mornings.

I have more than my fingers crossed!

Wishing you hours of enjoyment and contentment in your garden…
Posted by Colinas at 14:08