The Straw Which Broke the Jackfruit’s Back

Gardening is not always straightforward and painless. Friday had been a normal winter’s day, and a little windy… but not overly so. I could never have anticipated my awaiting surprise.

Upon returning home, I opened the family room curtains. As I looked toward our most looked-upon tree, there, before me, in its pride-of-place, was the sight of the formerly-symmetrical, heavily-laden jackfruit tree, now seemingly missing one side. Once, where there was the lovely sight of the glossy foliage of the jackfruit tree, now, there was back fence. Surprise? Rather, a shock!

Venturing out through the sliding door and along the bush-rock path, it soon became apparent that one of the major fruit-bearing limbs had split and dropped, the butt of the limb still attached to the trunk. At the other end, the load of jackfruits had landed, undamaged, on the path below. In these situations, one’s first reactions are often irrational or illogical. So it was with me… I tried to lift the stricken, fallen limb in order to see whether, in time, I could possibly raise and re-secure it in its former position. No chance! Then, the better-half came to help. Way beyond our capabilities, if we had persisted, we both could have required traction! It was so heavy! What to do? 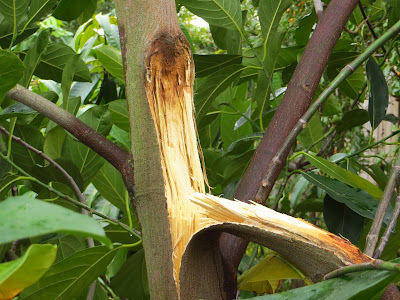 So, back indoors, I cogitated my options. Just like wanting your cake and eating it as well, I wanted to repair the tree AND retain the jackfruits, which, I had surmised, were within two months of harvest.  Having watched with joy the growth and development of our first jackfruit babies, it would be a bitter pill indeed to lose a large proportion of them now. From tiny ‘fingerlings’ in the New Year, we had fervently scrutinised their growth into fruit giants, some up to about four kilograms in weight at the end of June.

Returned to rational thought, I checked the internet for repair options for valued trees. Within a short time, I discovered that hanging limbs can be pulled back and bolted, the tree in time repairing the joint in a satisfactory manner… but there was no time to lose: this task would have to be completed within a day or two. To achieve this, the jackfruits would have to be removed. Knowing that immature jackfruits can be used as a vegetable, I was prepared to offer them to some of my friends who could prepare jackfruit curry. No ripe fruit - unfortunately – fresh, ripe jackfruit is delicious. The tree, however, would be intact again. A little disappointed, I would have my cake, but I would not get to eat it…

Lacking the requisite skills and equipment for such a task, I decided to call an arborist, a tree surgeon.

Engaging him on the phone was easy and the negotiations went smoothly… for a while. I explained that the limb had come down in the wind, asking whether there was some possibility of repair by bolting it back to the main trunk. He agreed to come and inspect the tree, to decide whether the limb could be saved. Then, he asked, “By the way, what type of tree is it?”.

Innocently and naively, I replied, “A jackfruit”. There was more than a moment’s silence on the end of the phone. “I am not kidding you. This is an Asian jackfruit tree, loaded with fruit.” He agreed to come the next morning. Saturday. He did not arrive. I called him during the early afternoon to see if he would be coming. He said he was busy on a job and would rearrange the time for Sunday or Monday. He never did.

For the past few days, this experience has rekindled flashbacks of the Dural nursery owner, who informed me that jackfruit trees would not grow in Sydney. Did the arborist think that I was ‘pulling his leg’, making a crank call? It is possible, that, in his whole working career, he has never encountered a jackfruit tree in Sydney, let alone one supposedly carrying its tropical load to breaking point!

So, my disappointment has me searching for more rescue options. It is too late for the injured limb now: bolting is no longer an option. Am I able to prop up the injured limb temporarily? Prop it just enough so that the fruit are not resting on the ground? Then, keep my fingers crossed that they will continue to ripen by August? Later on, excise the limb: our favourite tree should, over time, repair itself.

This tale has a loose end, however. So that the other main fruiting limb would not meet the same fate, I engaged a handyman to inspect the tree with a view to constructing a stable, extendable branch support… He arrived! Only then, did I inform him of the species of tree. Live and learn…