Our day with family in Muar was complete. We had experienced fine times in just being with family; we had enjoyed a satisfying lunch; we had paid fleeting visits to some of the obvious attractions of Muar township. It had been a pleasant day, and we had decided to round it off by visiting a small fishing village to the south… Parit Jawa.

Parit Jawa is just a short drive from Muar, roughly 20 minutes, through some beautiful settlements, the roads over-arched by lovely, flowering Albizia trees, the drive alone being worth the journey. Our visit on this day, is what might be termed a flying visit. A single afternoon.

We arrived about three. It was very hot. Nevertheless, we explored the environs of the little town. Aside from the vibrant colour of the fishing fleet clustered at dock, we were curious about the ‘harbour’ itself… 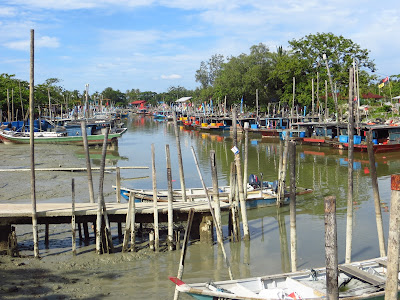 In the Malay language, a parit is a trench or a ditch. In the context of Parit Jawa, the trench is a man-made channel to a safe harbour, allowing entry and exit for the local fishing fleet through Pantai Leka or Leka Beach. In fact, the ‘trenching’ of Parit Jawa is believed to have been done by early settlers from the island of Java, Indonesia. Hence the name. 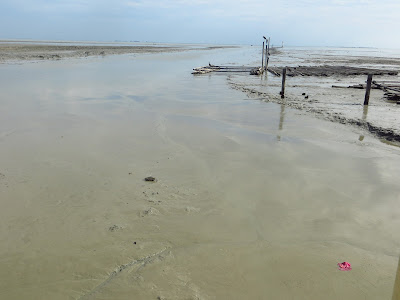 For my Australian readers, one must not associate endless strips of golden sand with the beaches of this Malaysian coast. Pantai Leka is primarily a mud flat, home to a wide variety of fish and shellfish species, bird life, reptiles and mammals. Mudflats of this type are akin to our east coast estuaries and estuarial lakes, a rich habitat.

Our journeys are as much about learning about the local wildlife, as about experiencing new places, new sights, new flavours and about witnessing people’s solutions to the vexations of life. So it was for our trip to Parit Jawa… Even though we had come outside the October - March migration season for marine birds, we came in hope of seeing some local wildlife, and especially, one of the rarest storks in the world, the Lesser Adjutant… We were not disappointed.

The Lesser Adjutants were not in profusion, but there were enough of them to observe as they fossicked in the mudflats seeking out their sustenance, or perched atop channel markers. We also had hopes of seeing some other birdlife. However, it was still mid-afternoon and very hot, possibly not the best time for such an activity. 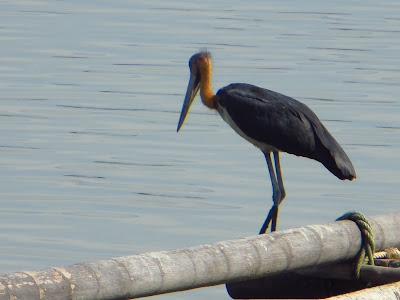 The waterfront park at Parit Jawa is well-equipped for observation: it has a ‘menara’ or tower at its northern end. It allows views, not only of the little town and its mudflats, but also of an adjoining stand of mangrove trees. During the main bird-watching season, this would be an asset for observation of the migratory birds.

After a brief walk through the village, the heat of the afternoon took its toll on us and we decided to forego dinner at one of the famed local seafood restaurants. So, we began the drive back to our southern base: dinner in Parit Jawa would have to wait for a future visit.

This, however, is not the end of our Parit Jawa story.

Some days after our lightning visit, we sat down to dinner with family members, some of whom held long memories of life in the Muar region. Our visit prompted the retelling of a fascinating story about a fearful time for the residents along this coastline of Johore. It was the era of Konfrontasi or Confrontation, a time of tension and hostilities between the new nation, Malaysia, and its neighbour, Indonesia. This occurred between 1963 and 1966.

People were fearful of commando raids, or worse, a full-scale invasion from their neighbouring nation. Many from outlying areas sought refuge with friends and relatives in the larger towns, such as Muar. All able-bodied men of age, including the better-half’s father, were required to do security patrols of the streets at night. In fact, some families were so frightened that they barricaded their doors and blockaded their staircases to prevent forced entry.

In such a state of alarm and confusion, the local Chinese residents consulted the Deity through a medium in the Chinese Temple at Parit Unas, about six kilometres from Parit Jawa. According to legend, the Deity, Sin Chai Yah Kong, conceived and constructed three straw human-like figures, placing these on the beach. Then, with the magical touch of the Deity, the three became a thousand. To the approaching sea-borne invaders, poised to make an attack, these figures on the shore appeared to be a thousand live, armed Chinese. A veritable army. Faced with what appeared to be an impossible task, the invaders had second thoughts and left the Parit Jawa area. Many, many lives had been saved… 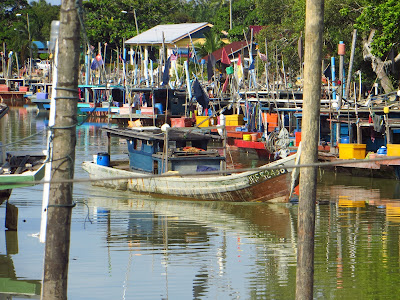 Wishing you hours of enjoyment and contentment in your garden…
Posted by Colinas at 21:44