Visiting family in Ipoh, we were passed a copy of a local Ipoh newspaper by a helpful relative. In the article intended for our perusal, were outlined places of interest for tourists to the lovely city of Ipoh. Among these attractions was one in particular, which we had not heard of, namely the Kledang Saiong Forest Park, which, according to the article, covered an area of more than 2,000 hectares, and was home to a fabulous collection of Nepenthes (Pitcher Plants or Monkey Cups). Because we were nearing the end of our Malaysia trip, we made plans to visit the Park the very next morning. Besides, it was just a stone’s throw from our hotel in Meru. 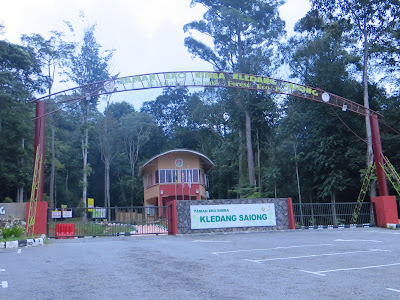 So, breakfast in the Bandaraya Ipoh came and went and we drove the few kilometres to the forest park. Unfortunately, when we arrived, it was closed, despite the signs advising that it should be open. This was disappointing, because the forest looked so beautiful from the gate. So, as an alternative, we went shopping for gifts at a mall, close to our Meru hotel.

Later in the afternoon, we tried again. This time, Kledang Saiong was open, and we were to discover later that it had been closed briefly during the morning for a religious observance.

On arrival, no camera at the ready, we spotted two large monkeys swinging in the trees at the front of the complex. Our immediate thought was that these were ubiquitous macaques, but we were given information to confound us later in our visit.
At the front office, we were required to sign in… You know the mischievous thoughts which pass through your mind at such an occurrence. “Is there a chance I will become lost in here?”

On completing the formalities, a young lady escorted us to the Pitcher Plant Garden. It was a small display, under shade cloth, of more than 70 species and hybrids from Malaysia, Indonesia, Cambodia, Philippines and Thailand, Sri Lanka, India and Australian breeders. The pavilion may have been small in area, but housed one of the world’s largest collections of Monkey Cups (Periuk Kera).


Some of the cups were suitable for drinking water, others were not. Some were fertilised by trapping insects, one in particular, preyed on mice. Some of the plants were tall enough to require physical support, others were small enough to be considered ground covers. In dry weather, all the pitchers required watering each day. Furthermore, our guide showed us how the female flowers were fertilised by the male pollen-bearing flowers. It was a short, but captivating experience.

Mini-tour complete, the better half returned to the car in the company of our lady guide, whereas I walked alone through the park in the hope of seeing some wildlife such as birds or butterflies, or even monkeys, swinging and jumping through the trees, as we had seen on arrival. Within one hundred metres or so, I came across a sign on the edge of an unswept path… Dilarang Masuk… Binatang Yang Buas. I guessed it meant ‘Don’t Go There… Wild Animals’, so I did not press my luck. After all, who wants to have their camera stolen by a naughty monkey. I returned to the office, admiring the trees, birds and insect life, signed out, passed on my thanks and returned to the car.

Without even having time to plonk my heaviest feature on the car seat, my better half could not wait to inform me that she had been mauled by mosquitoes and that, at some time in the recent past, the rangers had sighted a tiger in the park! Along with snakes and vociferous gibbons (Monyet Ungka)... Is this what we sighted at the beginning of our visit.

The Kledang-Saiong Forest Park is a fine venue for jungle walks. In addition, the locals use the park as a base for cooling off in the crystal-clear stream, and for barbecues and gatherings near the entrance to the park. However, its main attraction remains its excellent Nepenthes Garden.

Wishing you hours of enjoyment and contentment in your garden…
Posted by Colinas at 21:34