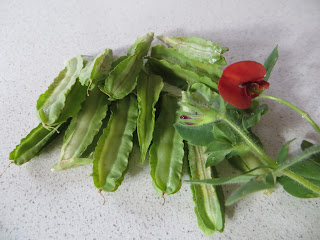 A recent experiment in our garden was the planting of Asparagus Peas. Apparently, Asparagus Peas originated in North West Africa. However, they will grow readily in temperate climates similar to Sydney's as a spring planting. They are a low growing spreading plant, useful not only for their pods, but also as a pretty, red-flowered ground cover or border plant.

Ours were planted last spring, dawdling along and producing few pods. With the advent of spring this year, the plants burst into renewed vigour, producing a multitude of attractive red flowers and tasty pods. Beware… you must harvest the little pods when they are young and tender. Otherwise, they will become pale in colour and rather hard, tough and stringy, past being crunchy and delicious.

Flavour-wise, they are like asparagus, as their common name suggests. I found them enjoyable, simply microwaved with an added dollop of melted butter and some white pepper.

As the season progresses, allow some of your older pods to mature and dry. Then, collect the seed for next spring’s planting.

Wishing you hours of enjoyment and contentment in your garden...
Posted by Colinas at 11:41

Email ThisBlogThis!Share to TwitterShare to FacebookShare to Pinterest
Labels: Vegetables