Today, a marauding Blue Tongue Lizard was identified by witnesses as a key suspect in the persistent loss of papayas from a local home.

A papaya, which had fallen from the owners’ only tree and had negligently been left on the ground, attracted the attention of the very large and ravenous reptile, known to his accomplices as Bluey. 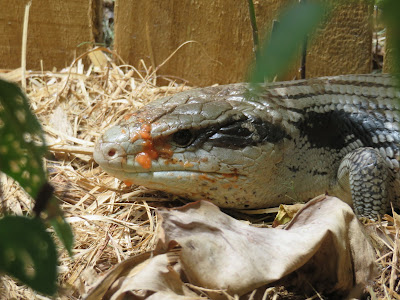 Experts consider that this is not Bluey’s first offence. Residents of the home had pondered for some time over the half-eaten remains of other fallen papayas.

Today’s daylight robbery was witnessed by a local resident, a tired cat and another resident Blue Tongue Lizard, a minor, watching from a safe distance from under an air-conditioning unit. 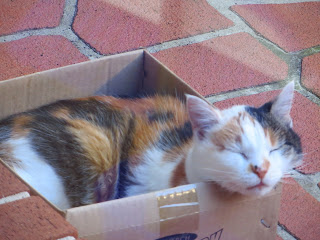 Upon the uncovering of Bluey’s crime, he skedaddled along a raised garden bed and under a neighbour’s fence. 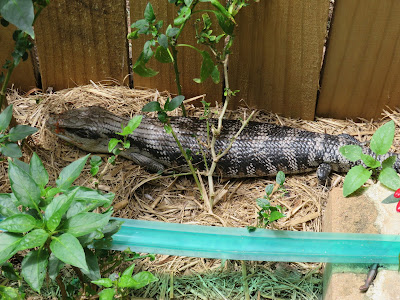 No arrests have been made.

Wishing you hours of enjoyment and contentment in your garden… And a Merry Christmas to all! 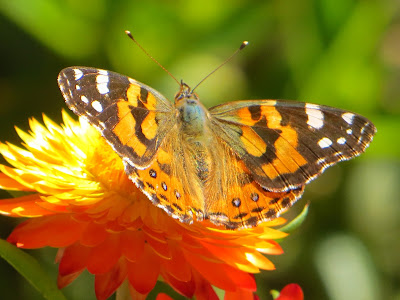 The Australian Painted Lady Butterfly (Vanessa kershawi) is a common visitor to the gardens of our city of Sydney. However, until this year, it has not come often to our garden. So, why, this year, have we been graced with the regular presence of this beautiful creature?

My belief… A simple change to the flowers planted in the garden.

The Painted Lady will feed and lay its eggs on many flowering plants. However, among its favourite food sources are Australian native strawflowers. This year, we raised Xerochrysum bracteatum plants from seed, transplanting the seedlings to our front ‘Senses and Butterfly’ garden. As these strawflowers commenced flowering, along came the Painted Ladies.

Their appearances have not been profuse, rather regular. During the spring months, we could rely upon an almost daily sighting of a Painted Lady feeding on our strawflowers and marigolds. I have read that the male of the species is territorial, chasing away other male interlopers. Therefore, I wonder whether males, in succession, were staking a territorial claim to our yard.

Interestingly, many Painted Ladies could recently be sighted in one of our local reserves. As one would walk along the pathways and through the grassed areas, the butterflies would fly up. Clearly, this grassland, with its low grasses and capeweed, provides ideal feeding and breeding conditions for the Painted Ladies.

Wishing you hours of enjoyment and contentment in your garden…
Posted by Colinas at 08:14 No comments:

Our objectives for the front yard were simple… Firstly, this was to be an area, heavy with fragrant plants, a garden for the senses. Secondly, we wanted to attract the local butterflies into our home.

As we have explained in earlier posts, our home was a ‘knock-down-and-rebuild’. During this process, unfortunately, our topsoil was moved and removed from what was to become the front yard. Consequently, what remained was a very thin layer of soil sitting upon a bed of clay.

Sadly, our first attempts to establish plants in this area were abject failures: we lost many of our prized plants in the first two years, including a large number of Aussie native plants. Furthermore, many more of our target species really struggled to take a foothold, looking feeble and sickly.

Because of our inglorious beginnings, a dedicated approach would need to be taken. Where we had established our back yard with relative ease, the front with its shallow topsoil was going to be a more difficult proposition, requiring time, patience and a clear strategy. So, how did we go about rejuvenating this difficult landscaping task?

·         Spread garden soil mix. From the back-filling of a retaining wall, we had some left-over garden mix. This was spread over a large part of the front yard.

·         Apply Gypsum. A major problem for us came during periods of heavy rain: the water would run off and away in a stream from the front soil. In order to break down the impervious clay subsoil, we applied liberal doses of gypsum to the soil. Notably, gypsum is highly effective in improving soil structure and water infiltration. However, it also has nutritional benefits to plant life as a source of calcium and sulphur. 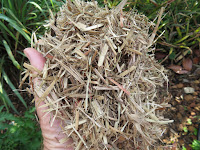 ·         Cover with Sugar Cane Mulch. For the past three years, we have provided a heavy covering of sugar cane mulch to suppress the weeds and to retain soil moisture. Even though there are more beneficial mulches, such as pea straw or lucerne hay, we have utilised sugar cane mulch because of its ready availability in the city. 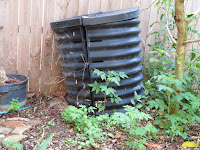 A situation like this makes your compost bin the most valuable item in your garden. We have been applying our own home-made compost to the front garden soil for the past two seasons, and it has made such a difference. The compost is rich in nutrition and wildlife, gardens worms by the score to work their magic in restoring the health of the soil.


·         Understand the needs of individual plants. The fragrant garden holds plant members whose needs are antithetical to each other. For example, where our kasturi lime and pomelo trees respond to the alkalinity of gypsum, garden lime and dolomite, our gardenias and Chempaka tree detest similar conditions. We have had to keep liming agents well away from the gardenias and Chempaka (Michelia x alba) lest we invite disaster!

·         The Secret Ingredient. Last year, the front yard was heavily planted in parts with marigolds, both the tall and short varieties. Not only have we discovered that certain species of butterflies find the marigolds attractive, but also that the marigolds are a soil fumigant. At the end of the growing season, the marigolds were pulled up, chopped up and spread over the surface of the soil. We had read that, by keeping this marigold mulch moist, pest nematodes (which inhibit the ability of plants to take up nutrients and water) would be fumigated and exterminated by the gas released from the decomposing marigolds.

This year, we have allowed the marigolds to self-seed and regrow to repeat the cycle of soil fumigation and renewal. 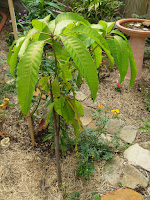 A major transformation in the health of the front garden has taken place. No longer are we losing our newest plantings. Furthermore, the area is visually more inviting and clearly more productive, with a greater diversity of plants surviving and thriving. An indicator of this increased health is the number of visiting birds and butterflies.

However, our efforts are not yet complete because problems remain… an ailing Chempaka tree, a young pomelo which is flowering heavily, but not yet setting fruit, and a young Chokanan mango tree of four years, which is failing to thrive. Otherwise, important strides have been taken in the rehabilitation of a degraded section of our garden.


Wishing you hours of enjoyment and contentment in your garden…
Posted by Colinas at 14:59 No comments: