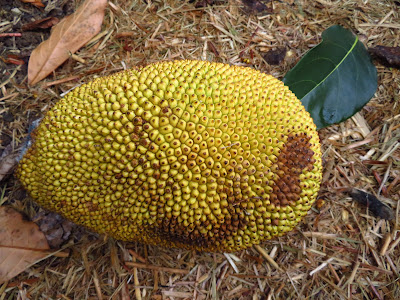 A watched pot never boils… In the case of our garden adventures, the adage has never proved so true.

Last year, through the Sydney winter, we watched expectantly the progress of ripening fruit in our jackfruit tree. It was the first fruiting season of the young tree, and it was holding eighteen fruit – in hindsight, far too many. The fruit should have been thinned to just a few.

Our expectation and anticipation were piqued by the fact that we had been told that jackfruit could not succeed in Sydney’s climate. With these challenging remarks in mind, we checked the welfare of our fruit protégés on an almost daily basis. The tree was certainly a watched pot! Molly-coddled, the fruit was covered to protect it from insect attack, a whole gamut of predatory animals, frost and prying human eyes!

A broken main limb in July last year, due to the weight of fruits succumbing to windy conditions, followed by a fruit rot in August, combined with the cold of our local winter saw off our remaining fruits… allowing us just a single green jackfruit to make curry. The watched pot never boiled!

So, the seasons passed by, from spring and on to summer. In December, I decided to lop the tree, jackfruit trees being remarkably vigorous growers, even in a temperate climate. As I reached towards the top of the tree with the extendable lopper, I noticed a medium sized fruit, sitting almost at its peak… too high to cover, too high to molly-coddle this time around.

The lone fruit received four buddies during our hot summer. This season, we neglected the growing fruit: no ritual checking, no pest covers, the fruit were left to their own devices. No watched pot this time around!

On Friday, we were blessed with consistent rain allowing me to plant a new purchase, a variegated Alpinia ginger. Therefore, the following morning, I collected the garden tools and made my way to the sun-side of the jackfruit tree, to put in the new ginger. There, lying on the ground, just two metres away, was a gold nugget, a jackfruit. From that distance, I could see that it had marks on its skin, and had two divots, gnawed presumably by a marauding possum. Prepared for further disappointment, I trudged over to pick up the fallen fruit, thinking that it had rotted in the tree.

The perfume was overpowering. So sweet!

Despite the external blemishes and a little rot on the stem end, the fruit was soft, appearing to be ripe and ready to eat. I rushed inside to show off the prize to the Better-Half, then cut it in half for inspection. The fruity aroma was overpoweringly delicious, and the arils were glowing yellow, the colour of autumn sunshine: it was ready to consume. 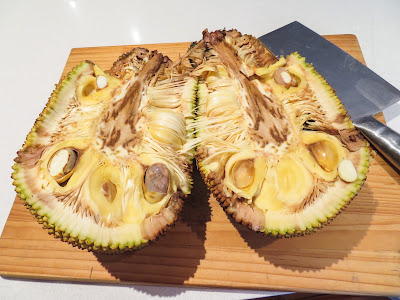 And it was sweet, crunchy and faintly juicy… the flavour and texture, just as we know them, from the delightful honey jackfruits of our many Malaysian sojourns. The unwatched pot had boiled deliciously! 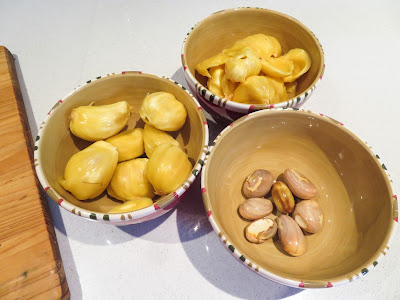 So, it is possible to grow and fruit jackfruits successfully in Sydney’s marginal climate! However, questions remain.

Were we lucky enough to choose the correct seed variety to plant? Will all seedling varieties achieve sufficient ripeness, remembering that each variety has its own season for setting fruit and for maturation? Jackfruits are not all the same… Perhaps our second tree which sets fruit in the autumn and winter, rather than summer, will provide an answer in the years to come.

Wishing you hours of enjoyment and contentment in your garden…
Posted by Colinas at 21:52