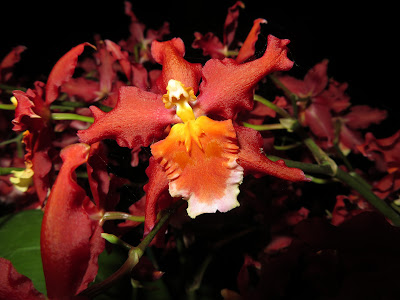 ‘Fire Side Fever’ is a delightful member of the Oncidium alliance of orchids. She is fast-growing, and free-flowering. For us, she produced eight spikes of gorgeous terracotta-red blooms in her first season, and twelve spikes this summer and autumn. Some spikes will reward you with 40 or 50 blossoms, even an occasional 70.

Labelled on purchase as Wilsonara Pacific Panache ‘Fire Side Fever’ and frequently found on the ‘net under this name, this delightful plant is branded as a Burrageara on the website of the International Orchid Foundation, orchids.org.

Knowing the proper appellation of the plant is extremely helpful: it provides important clues to the correct care. So, what is the difference between a Wilsonara and a Burrageara?

Wilsonara-type and Burrageara-type Oncidiums share a common ancestry. They are a hybrid admixture of Odontoglossum, Cochlioda and Oncidium species. The difference is that Burrageara orchids also include a Miltonia species in their breeding. So, why the name change? I don’t know… but I’ll keep reading.

So, why is it important to know the genetic breakdown of an Oncidium orchid? Some Oncidium species are cool-growing orchids, for example, from mist forests high up in the mountains of South America, whereas other species are warm-growing, from jungle lowland locations of Central and South America.

In the case of ‘Fire Side Fever’, three of her species ancestors (Miltonia, Cochlioda and Odontoglossum) are cool-growing. When I learned this, I started to grow this beautiful orchid more effectively.

Moving to our new home on the Mid North Coast of New South Wales, ‘Fire Side Fever’ was placed on our north-east facing verandah, alongside all our other Oncidium orchids. She received ample direct morning sun and, like the other orchids, endured the hottest spring and summer days. However, ‘Fire Side Fever’ regularly displayed scorched leaves, a sign that it was not entirely happy.

As a consequence, we moved her to our south-facing porch for the remainder of the warm season… In the winter, she will return to the warmth of the front verandah, to be placed at the top of the orchid stand in order to avoid the piercing rays of the sun.

What else can we learn from its cool-growing ancestry and mist-forest inheritance? ‘Fire Side Fever’ loves humidity. We use the pot-in pot technique… her plastic pot stands inside a terracotta pot part-filled with stones. The two pots are then placed on a substantial tray and this is filled regularly with water. The terracotta pot then absorbs the excess water, thereby increasing the humidity around the plant. Furthermore, on the hottest days, she is given a quick mist-spray from the garden hose!

Furthermore, her misty origins suggest that she loves water. Therefore, never let ‘Fire Side Fever’ dry out. However, never allow her orchid mix to become soggy either. When rewatering, make sure that she is almost dry, not bone dry.

When I purchased ‘Fire Side Fever’, she came in a 125mm pot. Because of her fast-growing nature, at the end of her first flowering season, she was transferred to a 180mm pot: she will remain in this pot for two flowering seasons. Then, I will decide whether to pot-her-on to a larger pot, or divide her into two or more sizeable plants.

Is she quirky? Yes. This season, some of her spikes emanated from the top, the pointy end, of the pseudobulb. If this happens, her flower-load is reduced, but when she forms her spikes from the optimal location at the side of the pseudobulb, she is floriferous! Stunningly beautiful.

And her quirkiest habit of all? Her January, mid-summer flowers tend to be of a lighter colour, an orangey-colour which fades to pink, compared to her autumn, March and April, flowering of scintillating terracotta red.


I can thoroughly recommend ‘Fire Side Fever’. Her four months of abundant display is clearly the most attractive of our current Oncidium Alliance plants.

Please stay safely at home during these dangerous Covid-19 times. Wishing you hours of enjoyment and contentment in your garden…

Email ThisBlogThis!Share to TwitterShare to FacebookShare to Pinterest
Labels: Flowers